Centuries ago, armies discovered that soldiers performed better if they slept under shelter, and began issuing individual tents to be carried on the march. Inevitably, soldiers began wrapping their tents around them as shelter from the rain as they walked. Commanders took notice, and modifications were made so that the tents would be more useful as cloaks.


These are what evolved by the early 1900's. They're more effective than ponchos, and more convenient and versatile than rain suits. I've collected German, Swiss, French, Swedish, Norwegian, Hungarian, Czech, and now Polish versions. The latter is the best of the best.


The Polish army issued these in three different sizes to accommodate different heights. They're made from a very nice light cotton canvas. Breathable, but thanks to an extra layer over the shoulders, also very water resistant. The olive-drab color is perfect. Good camouflage without being Rambo-ish. I appreciate that there's no brown in it - I'm paranoid about wearing brown during deer season. It doesn't look too stupid to wear in public. (Okay, it looks pretty stupid, but not as stupid as most, and not as stupid as being soaking wet.) They're cut in the shape of a six-sided polygon, with no "tail" to either button up or drag in the mud as with square rain capes. Grommeted corners are reinforced with an extra layer of material. Unlike with most rain capes, though, there's no annoying grommet at the peak of the hood.

Buttons are sewn-on, so they're easy to replace. They're plastic rather than the usual metal, so they make less noise, won't rust, and they're easier on cold fingers.

One cape can be pitched as a minimal shelter, and two can be buttoned together to make a small pyramid tent, 4'8" high. That's more stretching room than any similar military shelter I'm aware of and more than a foot taller than the U.S. shelter halves that I spent my military career using. And it's lighter and more versatile.

Each rain cape was issued with two sections of the four-section center pole, and four ingeniously curved stakes that fit inside the pole sections without rattling. Veteran infantry tends to quickly "lose" such excess weight. But no matter, your walking stick and some improvisation will do. The thin stakes are meant to go through the grommets on the lower edge. I tie loops of biodegradable baling twine to the grommets so that larger stakes (usually sharpened sticks) can be used. When camp is broken, I can simply cut the twine if necessary. (Anyone whose tried to chip a frozen tent out of the snow without damaging it will understand what I'm talking about.)

When worn as a garment, there's a drawstring to take in some tucks and keep it from falling over your shoulders. A second drawstring forms the hood. It can be worn over equipment or under a belt. Unlike separate  jacket-and-pants rain gear, it's not a big production to put on and take off. It's large enough to drape over your legs when canoeing or sitting on a deer stand. You can even relieve yourself inside one without taking it off and getting wet. Make yourself a comfortable seat, light a candle lantern between your legs, and it's an instant heated deer blind that disguises your human shape. If you leave it mostly unbuttoned, you can keep your rifle under cover but ready for use. 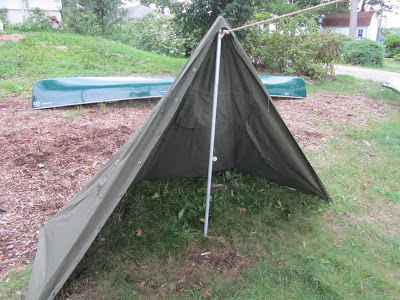 Here it is pitched singly as a minimal shelter. Not something I'd like to face wind-driven rain in, but I did spend an afternoon of moderate rain in it with no trouble. It's better than any other single half-shelter I'm aware of, and as good as TWO shelter-quarters such as the smaller German-inspired zeltbahns. 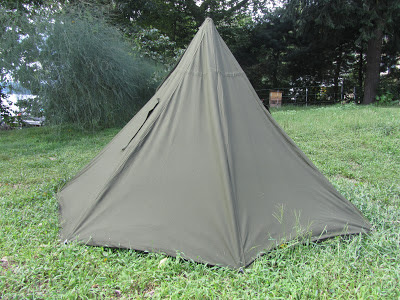 Here are two buttoned together make a tent. I doubt that many soldiers would take the time and trouble to make a tent other than in training. Exhausted men are much more likely to simply wrap up in them and wiggle under a vehicle or something. But they do make admirable tents. The flaps and the peaks overlap in such a way that there's much less wind-driven rain leakage than with most of these sorts of tents, and no need to put a helmet on the peak to keep water from coming through the grommets - as I mentioned above, there are no grommets at the peak. Pyramid tents are my all-around favorite. they go up easily with only one pole, and there are no guy lines to trip over. The only downside is that the door isn't vertical, and you lose some useable floorspace to rain when it's open.

When pitched as a tent, the extra shoulder material properly goes inside. The drawstring across the shoulders now serves as a place to hang a candle lantern or drying laundry, and the arm-hole flaps will be properly shingled.

The tent is startlingly dark inside, nice for sleeping and an indication of how weather-tight it is. That should make it an excellent ice-fishing bob house - you can see right down into the water when there's no light reflecting off it. It's surprisingly easy to heat with just a candle.

If you pitch a tent on high ground and soil that isn't compacted, drainage isn't usually a problem. If you're on hard ground or anticipating a downpour, a trench around the tent with an outlet ditch to divert water is a good idea.

Like a poncho, a rain cape is comfortable to hike in, with good ventilation for warm weather, and easier to put on and take off than separate pants and jackets. Even better than a poncho, it provides closer coverage and doesn't flap around so much in the wind. It may be worn over a pack or under a belt. It's full enough to cover your legs when you're canoeing or sitting on a deer stand.

To carry it like Civil War Johnny Reb's carried their blankets, roll it and tie with a clove hitch, then a series of half-hitches, and finish with another clove hitch. Then tie the ends together and wear it wear it across your torso like a bandoleer. During deer season you'll have rain gear, an emergency shelter, a drag rope, something to sit on, or a pillow, whichever you want at the moment. John Malcolm Thorpe Fleming Churchill, AKA "Mad Jack", 1906-1996Mad Jack was a British officer who carried a longbow and a Claymore sword into battle. Not the Highland Rebellion of 1745, World War II. And he used them. He ambushed a German Sergeant in France with his bow, and led charges with his Claymore in Norway, Sicily and Yugoslavia. In his last action, every Brit who wasn't Mad Jack was killed by mortar fire. When the Germans captured him, he was playing "Will Ye No Come Back Again?" on his bagpipes. He also carried bagpipes into battle. They didn't call him "Mad Jack" for nothing. He was sent to Sachsenhausen concentration camp, but crawled under the wire and through a drain and was walking towards the Baltic coast when he was recaptured. He was sent to another concentration camp, but escaped again and walked 150 miles until he was picked up by an advancing American unit. They sent him back to England, where he was bitterly disappointed to learn that the war had ended while he was en route.

"If it wasn't for those damn Yanks, we could have kept the war going another 10 years."

After the war he became a passionate surfer. The character of Lieutenant Colonel Kilgore in the film 'Apocalypse Now' is partially based on him.

In later years, Churchill served as an instructor at a school in Australia. He threw his attaché case out of the train window each day on the ride home when passing by his house so that he wouldn’t have to carry it from the station.

Every war brings out some remarkably eccentric personalities, but most of them don't survive for long. Mad Jack lived to be 90. 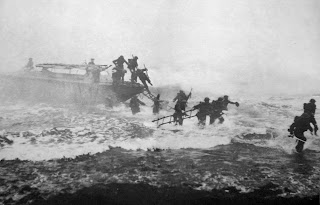 Notice the dude on the far right with the sword. That's Mad Jack. All the sissy-boys with rifles are behind him.
Posted by Oblio13 at 6:02 AM No comments: