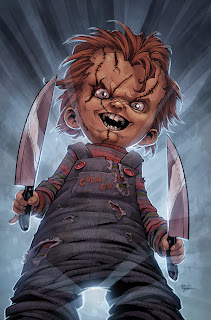 There's an omnipotent being who watches everything you do and knows everything you think. He'll reward you if you're good, and punish you if you're bad. No, I'm not talking about a god, I'm talking about Santa. Same general concept, though: We use Him to make others behave.
We heard six-year-old Rudy get out of bed at four a.m. on Christmas morning and pad to the top of the stairs. There was a long pause as he beheld all the presents under the tree. Then he shrieked "I TOLD YOU I WASN'T THAT BAD!!"
I'm going to step things up a notch this year. I'm going to tell him that Santa is old and burned out. He doesn't like kids anymore. He's not going to bother leaving coal and hickory switches for boys who sass their mother and neglect their chores. He's going to have them killed. By elves who look like Chucky.
Posted by Oblio13 at 5:22 PM