How to catch dinner with dental floss: 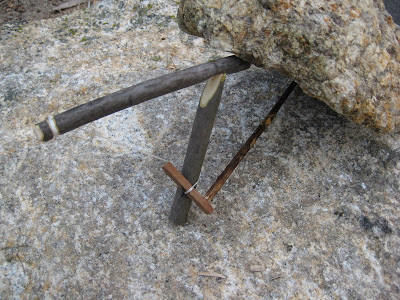 Been playing around with the "figure four deadfall" since Boy Scouts. However, they tend to be frustrating to set, and have a tendency to not trip when they should.

Have recently been experimenting with the "Paiute deadfall", and like it much better. It's easier to make, easier to set, and more likely to work. The trigger is more reliable, more sensitive, and faster.

There are some good videos online (some a lot better than others) and Google is your friend.

I made this one from some small serviceberry sticks and dental floss. It's on top of a rock frequented by the chipmunks that are raiding our garden. A smear of peanut butter on the long trigger stick is the bait. The lever stick is about six inches long, and the post stick about five. Seems just about the right size for chipmunks and red squirrels, and likely to work for anything from mice to gray squirrels.

Maybe a few of these belong in your pack on treks where you intend to supplement your diet by foraging, or when there is a significant risk of being stranded or lost. They're much lighter than Conibear 110's, and even lighter than snares. The posts and trigger sticks are so easy to fashion that you really only need to carry the lever/string/toggle assemblies. They don't get beat up the way snares do, so you can use them over and over.

I whittled a few on a rainy day, in front of the woodstove with good light, proper tools and warm hands. It was fun, and I'll have either them or the knowledge to duplicate them from now on.

Trapping laws tend to be strict, so be informed and careful. But don't wait until you're starving to figure out how to do all this stuff. You can practice without harming any animals if you use a weighted cardboard box instead of a rock. I went through a military survival school years ago and didn't catch anything for the first five days. If I'd known then what I know now, I would have been a lot more comfortable.
When you set traps, the more the better. Half a dozen minimum. Mark the location of each one somehow, AND draw a map. Otherwise you'll never find them all again.
Posted by Oblio13 at 11:04 AM

Oblio 13 - would you consider having your photograph of a figure-4 deadfall in an Arizona museum prehistory exhibit? Contact the curator: sandy@sharlot.org