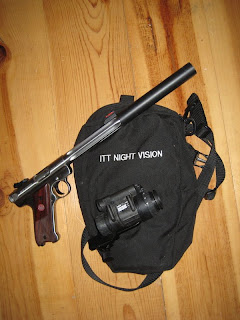 During the survival portion of military flight school, we were taught that accurate .22's, preferably equiped with optics and suppressors, are wonderful tools for collecting protein.
We were also taught to rethink our cultural food prejudices.
Since then, I've amused myself in a wide variety of places and circumstances by visualizing what sustenance could be unobtrusively procured with such a tool.
Today's list comes to you after an early morning stroll on Miami's South Beach:
1. Doves. A delicacy broiled with a slice of bacon and a jalepeno toothpicked on top.
2. Seagulls. Charles Lindbergh ate one when he was floating around in a liferaft and said it was awful, but it saved his life.
3. Cats. Don't know for sure, but I'd wager they're not too bad.
4. Tourists. An especially plump, tender, moist, pink one was overheard desiring a soda and a donut for breakfast, but not wanting to walk too far for it. That'd be some good eatin'.
Posted by Oblio13 at 4:33 PM

If you feed a tourist exclusively on a diet of fresh apples, nutmeg and cloves for a few days before preparing them for the oven - and cook with the stomach in, the flesh is left with a most delicate arrangment of flavours and essences.

Cat tastes a lot like rabbit/hare. Some Germans still refer to cats as "Dachhasen" (lit. "roof hares") and they were a staple during the later years of WW2 when food ran low (the name started in the Siege of Vienna in the late 1600s).

If you have a skinned and prepped cat it looks almost identical to a rabbit (only the shoulderblades give it away apparently), and the taste is also meant to be very similar.

I have personally finished off a day of duck hunting, courtesy of Italian hunting buddy, with Coot breast and goose liver spaghetti sauce that was a cut above most I have eaten; and with none of the fishy flavor I expected, which according to the cook is resident in the bones, not the meat.

On a related note, as I have re-named it, a Coot du jour recipe [down the page a bit]:
http://stephenbodio.blogspot.com/2005/11/crowleys-ridge-nature-center.html