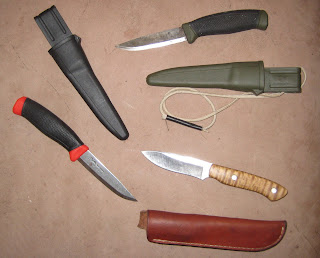 There seems to be a tendency in the modern bushcraft movement towards large Bowie-style knives. Such knives were originally designed for fighting, and are impractical for anything else. (Even if you're experiencing an inordinate number of knife fights on your camping trips, you'd be better served with, say, an H&K USPc .40 on your hip. As grandma used to say, "Guns beat knives.")
Knives that are practical for general camp chores, processing game, cooking, etc. will have a blade in the neighborhood of 4" long, sharpened all the way back to where your index finger goes, since that's where fine work is done. I like a minimal lower guard, and no upper guard at all - they only get in the way, and prevent the use of a proper deep sheath. No serrations, either, since they're difficult to sharpen and make fine, detailed work difficult. The back of the blade should be relatively straight, with a clip point and enough "belly" for skinning. Such a blade won't be as good for skinning as a dedicated skinning design, nor as good for filleting fish as a dedicated fillet knife, but it'll get either job done without frustration in a competent hand.
My favorite knife is a Bark River "Copperhead", but cheap Mora's from the Frost company perform every bit as well, and for 5% of the cost. They're light enough to wear as a neck knife, with a length of para cord threaded through the sheath. I secure the ends of the cord with duct tape rather than a knot so that it will come loose if necessary.
Posted by Oblio13 at 7:32 AM