There are lessons for living that we can learn from dogs. Our canine friends are always honest and open. They take pleasure in simple things. They don't waste time regretting the past. They don't worry about the future.
On the other hand, they enjoy drinking from toilets. I think the key here, as with most things in life, is taking the good and leaving the bad - and being able to differentiate between the two.
When I was in the military, I had "Dogist" stamped on my dog tags in the place where your religion is supposed to go. When I was questioned about it, I said "Sir, if I can't eat it or hump it, I piss on it".
Some of those senior Marine officers have no sense of humor.
Posted by Oblio13 at 5:26 PM No comments: 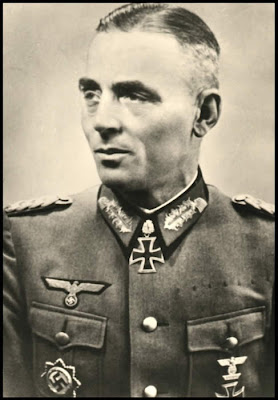 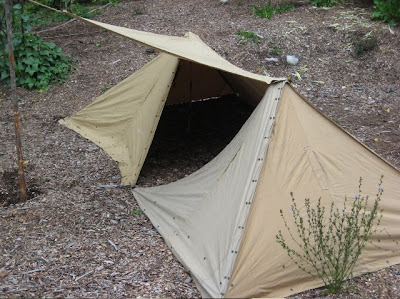 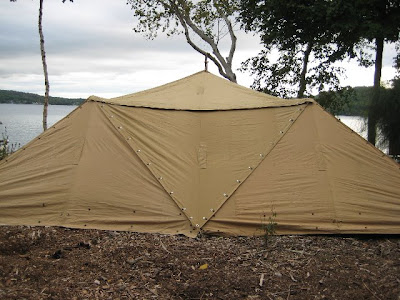 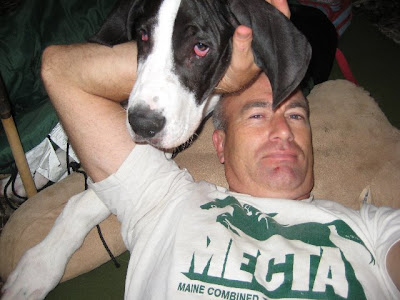 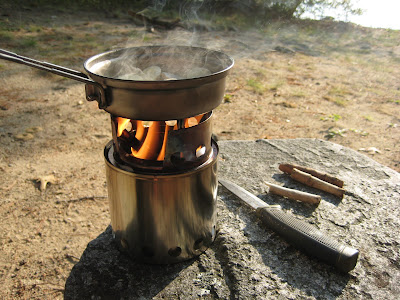 The "Bushbuddy" stove is a lightweight stainless-steel camping stove made by Fritz Handel in Canada. I don't know anything about him except that his workmanship is excellent, and that when I emailed him to say so, I got a nice personal reply. His stove fits neatly inside a Snowpeak titanium pot. Stove, pot and a matching titanium spork weigh a total of one pound. It will boil a liter of water in about ten minutes using twigs, pinecones, trash or even dried dung for fuel. No moving parts to wear out or break, no fuel to buy, carry, spill or smell. The only downside is that it makes pots sootier than a gas or alcohol stove would. Walking into the camp pictured above, I picked up one arm-length, finger-thick oak branch with some twigs still attached. That's more than I needed to fry eggs and potatoes and boil tea.
Posted by Oblio13 at 2:32 PM No comments:

Obama is a lawyer. He's never been anything but a lawyer. He married a lawyer. He chose a lawyer with bad hair plugs as a running mate. He sees the world through lawyer eyes. He processes what he sees with his lawyer eyes through a lawyer brain. He's never had his courage tested, either voluntarily or involuntarily. We don't know what he's made of, and neither does he. He's never been in the military, but he "thought about it once", so he feels qualified to jump into the middle of a war as commander-in-chief. He's promised everything to everybody, with no way to pay for any of it. Since he became a senator, he's literally done nothing but run for president while we pay his salary. Credit where credit is due, though: He reads a teleprompter more charismatically than McCain. This is the best America can do? We've gone from George Washington to this? A president who led from the front, armed and mounted, to one who sues people for discrimination and plans to negotiate with zealots?
Posted by Oblio13 at 12:44 PM No comments:

Rubbing sticks together to make fire 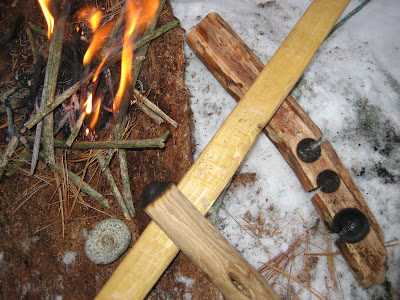 There's a primal satisfaction to starting a fire with stone-age equipment. There are plenty of videos and how-to articles about bow drills available on line, but I'll throw out these few tips: Technique is critical. Kneel, step on the hearth board, brace your spindle arm against your leg for stability, and concentrate in long, level strokes with your bow hand. Start slowly to warm things up and develop a smooth rythm. Don't bear down hard until you've already filled the cut-out with dust. Sometimes the bearing surfaces polish each other and they stop producing dust. A pinch of dry sand will help. Once you get a coal (you'll know you have one if your little pile of dust keeps smoking after you've stopped drilling), don't be in a hurry to transfer it to your tinder bundle and start blowing. Giving it thirty seconds or so to coalesce will be beneficial.
Posted by Oblio13 at 11:42 AM 3 comments:

Behold the fisherman:
He riseth early in the morning
And disturbeth the whole household,
For mighty are his preparations.
He goeth forth full of hope,
And returneth smelling of strong drink,
And the truth is not in him.
Posted by Oblio13 at 5:19 AM No comments:

Gear that works: The Thermette from New Zealand 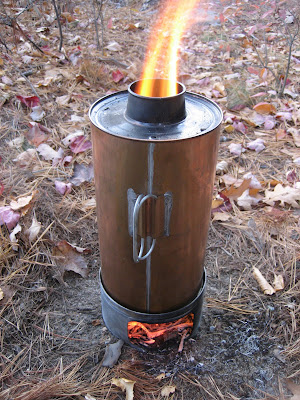 After decades of roaming the globe and seeking the wisdom of elders, I have discovered the secret of happiness: Hot water. If you can start the day with a cup of tea and end it by cleaning up, almost anything in between is bearable. It weighs three pounds, so it's not for backpacking when weight and bulk are critical. But when you're camping by canoe, sled, horse, car, or airplane, this wood-burning gizmo is the best way to get hot water. It out-performs the similar but better-known Kelly Kettle. A double-handful of pine cones, twigs, trash or dried horse shit (no, it doesn't smell) will give you a half gallon of boiling water in short order. It comes with a stainless steel ring that fits on top, so you can cook with it to boot (yes, even when it's burning dried horse shit). There's no petroleum-based fuel to buy, carry, spill or smell (gasoline smells but dried horse shit doesn't). There aren't any moving parts to wear out or break. Thermettes have become expensive recently, but if you're handy perhaps you could fabricate something similar. I've scavenged some copper roofing and one of these rainy days will make some paper patterns and give it a go. Anybody know how to silver solder?
Posted by Oblio13 at 4:42 AM 2 comments:

A disturbingly informative visit to a medical museum.

I'm in Philadelphia again, and this time I went to the Mutter Medical Museum. I don't have the words to express how glad I am to be living in the age of antibiotics, vaccinations and anesthesia. If you'd like to shed a couple pounds, check out the displays of advanced syphilis, tuberculosis and cancer before lunch. I promise you won't be hungry.
Some of the morbidly fascinating displays:
Pocketbooks, wallets and bookbindings made from human skin. Apparently it was not uncommon around the civil war era for doctors to tan the hides of their dead patients. And since the standard cures for just about everything were mercury, opium, bleeding and blistering, there was lots of leather for arts-and-crafts projects. And you thought it was just for Nazi's.
A collection of trepanned skulls. A number of ancient cultures practiced trepanning - cutting a hole through the skull - for everything from removing bone splinters after rock-and-club fights to letting evil spirits out. The quality of the workmanship varied from remarkably good to breathtakingly crude. I imagine much of it depended on how well the shrieking patient was restrained.
Thousands of items removed from the throats of choking victims. When your mother told you not to talk with food in your mouth, she wasn't kidding. And don't put pins or nails in your mouth, either.
How about a preserved forty-pound colon? Some unfortunate dude was born with an enormous digestive anomaly that displaced his other organs and made him look pregnant. He averaged one bowel movement per month, and it weighed about 40 pounds. Boy, I bet he could clear a room.
Posted by Oblio13 at 2:03 PM No comments:

An early-American attempt at social reform

If you're ever in Philadelphia, take a tour of the abandoned Eastern State Penitentiary.

Benjamin Franklin and Benjamin Rush were in on the planning. At the time it was the largest and most expensive building in America. It had heating and plumbing when even the president in the Whitehouse - Andrew Jackson - was using fireplaces and chamber pots.

In those days, governments had no way to track or even to positively identify prisoners. No dental records, fingerprints, retinal scans, drivers licenses, DNA samples, not even photographs. Officials had no idea what recidivism rates were. On both sides of the Atlantic, criminal sentences had traditionally been humiliation, torture and/or death, with incarceration merely incidental. Maybe a few hours in the stocks as a target for rotten food and rocks for drunkeness or swearing. Caning or whipping for more serious offenses. Perhaps a tongue cut out for heresy. Hanging or burning for the most heinous crimes like murder or practicing witchcraft.

By the late 1700's, a number of social theories about prison reform were floating around. The Quaker-inspired philosophy was that if criminals had quiet, reflective time and religious instruction they would be moved to penitence and reform. Thus the word "penitentiary".

So a facility with 7'x12' individual soundproof cells was built. Each containing a cot, toilet, and table. Prisoners spent their entire sentences in those cells. Food was delivered via a tiny door. No mail,  messages or visitors were permitted. No human contact of any kind was allowed except with religious instructors. Guards in the corridors wore socks over their shoes so that not even footsteps would be heard. Each prisoner was issued a bible. No other reading material was permitted. Each cell had a skylight called the "Eye of God" to remind prisoners that they were being constantly watched.
The administrators also went to remarkable lengths to prevent what was then called "self abuse. It was thought to be unhealthy as well as immoral.
Imagine being handed a bible, warned not to spank your monkey and locked in solitary with a god staring at you.

The system didn't reform criminals or bring them to penitence. It drove them insane.
Posted by Oblio13 at 5:36 PM 1 comment: