Book Review: The Man who Lives with Wolves

This narrative doesn't ring true. Some of the claims that author and subject Shaun Ellis makes are ignorant at best. The first glaring example was his description of the physiology of foxes when pursued by hounds. I even ran that one by my veterinarian, whose verbatim response was: "Total BS". His tale of living with a wild wolfpack for two years is simultaneously so incredible and so threadbare that it simply doesn't pass the smell test. No surprise, he complains often that scientists and biologists won't take him seriously. Speaking of things that don't pass the smell test, his perverse pride in not bathing or visiting a dentist becomes downright wearisome. His Native American "spiritual connections" are even more so. Co-author Penny Junor's previous books were unflattering exposés of celebrities and her father. She has no apparent qualifications for a book about wolves, and seems to have taken Mr. Ellis at his word with a minimum of vetting. The poor-quality photos of Ellis with caged wolves did nothing to corroborate his stories. His admissions, both tacit and explicit, that he was a drop-out and petty criminal who abandoned his families and cheated his employers fueled my doubts about his veracity, so I did a little online digging. The only credible interaction between Mr. Ellis and wolves that turns up is in an enclosure at a theme park/petting zoo in England. Shaun Ellis puts on a "daily howling exhibit", but the main attraction seems to be animated dinosaurs. He's currently making a good living as the star of TV reality shows filmed in the two-acre pen. The camera work must be difficult with the need to keep fences, litter, tourists and rubber dinosaurs out of the shots. Bottom line: He's a fraud, peddling phony research and mysticism to the gullible.
Posted by Oblio13 at 9:00 AM 1 comment:

If you're squeamish, don't read this.

A car in front of me hit a deer. It ran off on three legs. I marked the last place I saw it. By coincidence the driver was a boy I know. We gave the deer some time to expire or at least weaken, then set off to spoor it.

Quickly found where it had lain down, thrashed around and bled quite a bit. Then spent two hours and covered about two miles trying to puzzle out where it had gone from there. Lost the trail several times among other tracks, but by following individual trails for a distance we were always eventually able to find a speck of blood, or a spot where it had fallen, or where it had knocked off the brittle lower branches of pines. (Healthy deer are much more careful than that.)
At one point we came to someone's back yard, and the fellow was out on his deck with a pair of binoculars. I called to him, told him what we were doing, and asked if we could cross his yard. He told us that he had just seen the deer and that it looked fine, but that we could follow it if we liked. We almost quit at that point, but in retrospect I'm glad we persevered. I don't think he was looking at the same deer.

Happened across some other interesting tales in the snow, including a spot where coyotes had recently eaten another deer. The life-and-death dramas that happen every night in the woods are a lot more visible this time of year.

We knew we were getting close when we started finding spots of blood that hadn't frozen yet. The tracks started up a steep rise, and we came to a spot where the deer had fallen, then turned to go off at a downhill angle. I looked back at my young friend to tell him that it probably wasn't far ahead of us now, and realized with a start that I was looking right at it. It had fallen again, only about ten yards away. As soon as we made eye contact, it jumped up scrambling. I drew the pistol I usually carry for personal defense and fired four rounds. Ever see those videos of cops-and-robbers emptying their pistols at each other across the hood of a car without hitting anything? I've been to a number of shooting schools - military, law enforcement and civilian - and I practice and requalify regularly. But only one of my four shots connected. Handguns are far more difficult than shoulder arms to shoot well when the adrenaline is flowing. I was a good lesson for me.
Anyway, one hit was enough.
Turned out to be a good-sized doe with a compound fracture of it's right hind leg, and some massive contusions in several places. 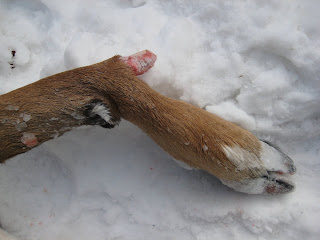 Curious about how the bullet had performed, I went through the gut pile pretty thoroughly. Never found it, but I did find a tiny fetus. 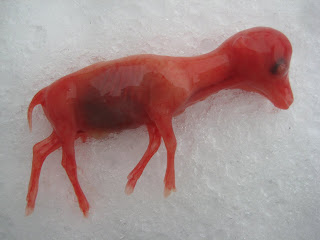 By then we were tired and had no idea where we were. We didn't want to backtrack all the way to where we had started. We could hear occasional traffic, and dragged the deer down to that road. Once we got our bearings, we were surprised at how far we'd gone. 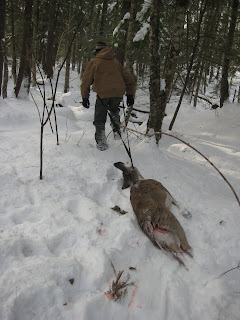 Finally consolidated boy, dented car and deer at his parent's house. His mother cooked the heart for us with onions and garlic, and his father sent me home with the backstraps, some home-made beer, and eggs from their henhouse.

The kid's an aspiring hunter. Too bad he got his first deer with a Toyota instead of a Winchester, but at least he learned some things about tracking, field-dressing and butchering.

It was a very satisfying experience to stay on those tracks like hungry wolves to a successful conclusion.
Posted by Oblio13 at 9:03 AM 5 comments:

And a baseball cap doesn't count for any of them. One for sun, one for cold, and one for rain. 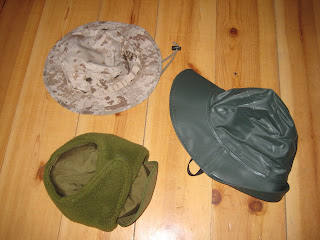 My wife somehow manages to look cute in any hat, and I can't seem to look anything but goofy. Even the dog looks better in hats than I do. 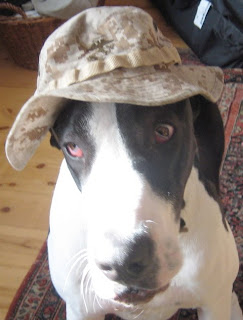 I've given up on fashion statements and put function ahead of form. For sun, I still have the hat Uncle Sam gave me. It's seen the world. For cold, watch caps or government surplus. For rain, nothing beats the traditional sou'wester, not even a hood.
Posted by Oblio13 at 2:52 PM 3 comments: 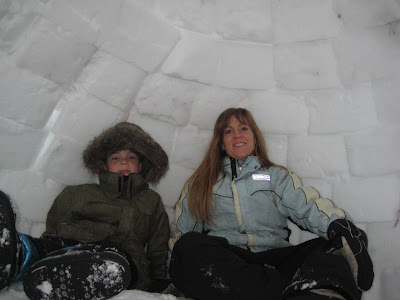 With wind-packed snow, all you need is a snow saw. That's rare around here, though, so most of the time we use molds, either purpose-made, five-gallon buckets, or coolers.
It's important to start on level ground and with a perfect circle.
The first few times are frustrating, and the roof will likely cave-in before you can finish. Stick with it, though, and you'll break the code.
I'm always surprised at how quiet they are inside.
Posted by Oblio13 at 4:16 PM 1 comment:

Well, I volunteered to pilot a relief flight into Port au Prince. I'm not much of a humanitarian, it was more out of a sense of morbid curiosity and for the adventure. Tried to talk my emergency-room-physician-buddy into going along, but after similar trips to Afghanistan, India and Nepal, he's had enough. Packed a hammock, water filter and work gloves and waited for a plane to be dispatched. It never was, though. Haiti's airport simply can't handle all the relief traffic that's pouring in. I'm writing this from the airport in San Juan, and it's busier than I've ever seen it before with planes that waited over Haiti for a turn to land until they ran low on fuel, then diverted here. Heard other planes on the radio diverting to Los Americas in the Dominican Republic and Providenciales in Turks and Caicos.
So I'm just following the news. I'm willing to bet that, just as with the relief effort after the Indian Ocean tsunami, mountains of supplies will rot before they can be distributed. Well-meaning people are donating record amounts to charities that will spend most of it on more fund-raising, salaries and other "administrative expenses". Giselle Bundchen gave 1.5 million to the Red Cross. The reporter said "She can afford it", which struck me as downright rude. Maybe I'm just protective of Giselle because I know we'd make a good couple. President Obama has pledged an additional 100 million in aid, which means that about 90 million will end up in the pockets of corrupt politicians.
Haitians being interviewed on the news are mostly angry that they aren't being rescued quickly enough. They're in dire straits, but the attitude still seems shockingly ungrateful. Like New Orleans after Katrina all over again, they seem to choose victimhood over self-reliance. Especially in a region plagued by hurricanes, you'd think people would have had the foresight to keep some supplies squirreled away. Even the poorest families have the means to keep some water and beans in empty pop bottles or something.
Supplies are piling up alongside Port au Prince's single runway. Distribution is a problem since many roads are damaged and there's a lack of fuel. Communications are poor, hindering the coordination of efforts. Injuries are becoming infected, and the usual post-disaster diseases will be making an appearance soon. There are reports of gangs with machetes stealing relief supplies.
What can we take away from this? Tens of thousands of Haitians are without shelter, water, food, light, medical supplies, sanitation, transportation or security. What would be useful if such a disaster occurred where you live? Tents, jerry cans of diesel fuel, paraffin lamps, candles, firewood, bicycles, medical kits, non-perishable food, the means to purify water, a latrine or sawdust bucket, defensive firearms, and the knowledge to use all of the above.
Update: I guess I'm more human than I thought. Pics and video from Haiti are keeping me awake at night. I'm still on a list to fly in there, but haven't been called yet.
Posted by Oblio13 at 5:02 PM No comments: