Before the days of C-rations and MRE's, the soldiers of many countries were issued 'bread bags', also known as 'ration bags'. The primary source of calories for fighting men is no longer hearty loaves of carbohydrates, so these are now being sold off as surplus. (Having eaten many C-rations and MRE's, I don't think they're an improvement over a canvas sack of bread, cheese and sausages.) Like most military gear, they are heavy and rugged. I only paid a few dollars for each of the bags below. One of them has a name written on it. Interesting to wonder about the last guy who used it. 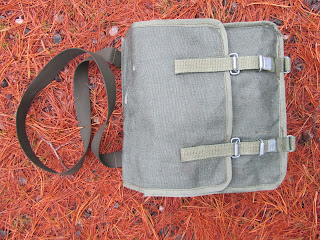 This is a Polish bread bag. It's a perfect fit for my Swedish mess kit, Trangia alcohol stove, and a liter of fuel. It has a clever compression-strap arrangement to keep things from rattling. I use another one as a 'possibles bag' for my muzzleloader. There are interior pockets that keep the powder charges, bullets, and accouterments organized. And there's still plenty of room for lunch. If you have kids, they'd make a good school bag or a funky purse, too. 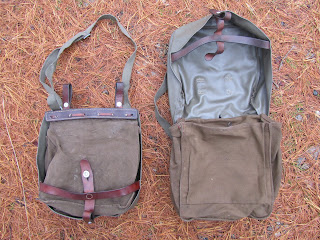 These are Swiss bread bags. They're designed to be fastened to bicycles as well as to be carried over the shoulder. If you're the sort of retro-cyclist who has a leather Brooks saddle, you'll love these as handlebar bags and panniers. They seem like an odd design until you use them a bit and figure things out, and then they seem ingenious. Very sturdy. Sturdy as in, like, you could issue them to soldiers during a war or something. They're made of heavy canvas with two inner pockets and quality leather straps. There's a leatherette cover that the canvas bag folds into so that one side is waterproof, but the other side still breathes. When unfolded, the waterproof cover serves as a place to put cutlery and food as you eat, to keep them from getting dirty or lost.