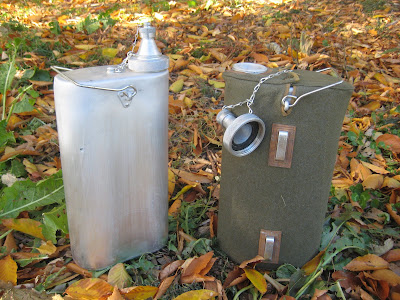 For warm-weather canteens, I use clear PETE soda-pop bottles. Light, tough, recyclable and free. They can be used to purify drinking water, too. Set them in the sun for a day, and UV radiation will kill biological pathogens. Simpler and better tasting than bleach, iodine or boiling.

For winter, though, I like uninsulated metal canteens that can be set near a fire to warm water or melt snow*. (*Make sure the cap is loosened so steam can escape.) I came across these Italian military surplus six-liter olive oil containers that are perfect for the job. Heavy-duty aluminum with a two-piece spout. A large opening for filling and a small one for pouring. Both caps are attached with chains so you won't lose them in the snow. (I've lost a lot of things in the snow, up to and including a tent...) There's a bale for carrying, and one side is concave so they don't bump into your legs like round buckets do. The opposite convex side has a couple welded brackets that will facilitate strapping to a pack or sled.

They came with a button-on wool cover. I'm not sure what the cover's purpose is, other than to look cool and make handling more comfortable in freezing weather. Perhaps the insulation moderates temperature swings and helps olive oil store better. Or it's intended to be wetted for an evaporative cooling effect in hot weather. Or all of the above.

It occurs to me that when set around a fire, these tall cans would not only warm water, but also reflect heat. (Again, make sure the cap's not on tight, or you're building a bomb.) I'll test that theory in a couple weeks when deer season starts.
I may get a couple more to use for their design purpose, storing olive oil. I occasionally visit a shop that has first-cold-pressed extra-virgin in bulk. The proprietor tells me it stays fresh for about six months, we go through about a liter a month, and these are six-liter cans. If that isn't a sign from the gods, I don't know what is.

On the internet, these are available for $32 at Sportsman's Guide, and $79 at Deutsche Optik. Guess it pays to shop around.
Posted by Oblio13 at 7:00 AM 6 comments: 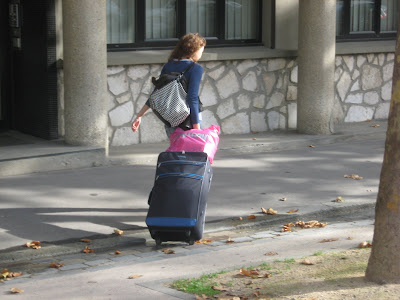 I overheard a couple other Americans here refer to the French as "surrender monkeys". Ironic, since America is in the process of surrendering in Iraq and Afghanistan right now. Declaring victory and retreating, more accurately, but same end-game. Just as we did in Korea, Vietnam, Somalia and Lebanon. I submit that we should not point fingers at the French.
Posted by Oblio13 at 6:26 AM 3 comments:

For a decade I've been going to JD's barber shop. I call him Crazy JD because he's always got some bizarre conspiracy theory or something equally entertaining. He thinks Allah is really Satan. I enjoy telling him that the Muslim and Christian gods are the same, that only the prophets are different. He comes unglued.

I went in yesterday for a haircut on my way to work. He started by spraying something on my head. I asked what it was, because he'd never done that before. He said it made cutting it easier. Whatever he was doing after that didn't feel right, either, but I was too stupid to ask more questions. When he turned me around to look in the mirror, the &@()?! Had given me a "flat top", a bizarre 1950's style.

Me: "Jesus Tapdancing Christ, JD, I look like the eraser end of a pencil."

Crazy JD: "Don't use the Lord's name in vain. You always get a flat top."

Me: "I've never had one. I'd rather be dead with my old haircut than alive with this one."

Crazy JD: "I must be thinking of someone else."

Me: "Jesus Christ and General Jackson, I can't go to work like this."

Crazy JD: "Doesn't your uniform have a hat? Stop using the Lord's name in vain."

Crazy JD: "There's not enough left. Maybe let it grow for a week and I can fix it a little."

He ended up buzzing my whole head except for a little tuft on the top front. It looks like the back of a merganser's head. No, I will not post pictures. 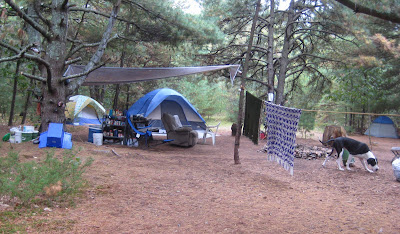 Knowing I'd have about a four-hour wait while my truck was being serviced, I took along my dog and a .22 pistol. There's a big patch of woods behind the dealership, and I figured I could spend the time squirrel hunting, plinking and foraging. Didn't get any squirrels. Only saw one, and it was too far away. In order for me to pot them with a handgun, they almost have to commit suicide. But gathered some puffballs and a bolete, ate some autumn olive berries, and filled a small backpack with exceptionally large red oak acorns. Came across some kind of fresh burrow. There were no tracks or bones outside, so I got down to sniff the entrance. Someone was home, and chattered at me. No idea what it was.

Came across a path with some odd wheel ruts, and followed it out of curiosity. It led to eight or ten tents scattered through a grove of white pines. No one seemed to be around, but they'd obviously been living there a long time. The ground was bare and packed hard. I was surprised by how tidy and organized it was. Shelves stocked with food, bags for trash, dedicated latrines. Bicycles, fishing gear, tables, clotheslines, charcoal grills, kid's toys, even two easy chairs. Most of the tents had tarps over the top of them for extra protection. There was a central fire ring with a radio in a tree nearby. They apparently drank a lot of beer, but credit where credit is due, they didn't toss the empties just anywhere. The only thing I saw that didn't impress me were a lot of shopping carts. Presumably they haul in supplies with them, and don't bother to return them.

I didn't stick around long, just snapped a couple pics and eased out of there.
Most homeless people seem to have drug and/or alcohol problems. Or they're just plain crazy. And there are supposedly meth labs here and there in the woods. But this didn't seem to fit those patterns. Every other "hobo camp" I've stumbled into was filthy and filled with trash.
I might go back again. It's the closest I'll ever get to making first contact with some jungle tribe.
Posted by Oblio13 at 5:31 AM 3 comments: