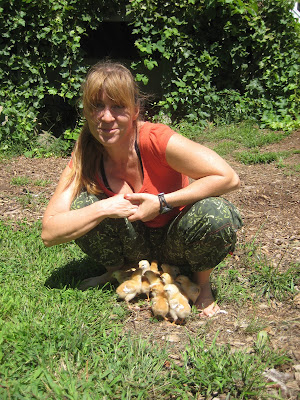 The latest peeps out of the incubator recognize a good mom when they see one. Hilarious to watch, they follow her around and run underneath when she crouches down. And this should be the definition of 'natural beauty' - looking good while squatting on chickens.
Posted by Oblio13 at 6:51 AM No comments:

The True Cost of our Government 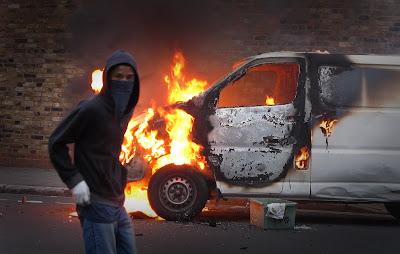 According to the Wall Street Journal, the Federal government will spend 3.8 trillion dollars this year. State and local governments will spend an additional 1.6. The cost of complying with government regulations will add another 1.8, bringing our total cost of government this year to 7.2 trillion dollars. That is equal to every penny earned by every American from January first through august twelfth. The eight years of George Bush's presidency added 18 days to our annual sentence. The (so far) two-and-a-half years of Barak Obama's presidency have already added 27 days.

Our leaders no longer even discuss actually reducing our national debt, only how much deeper to go into it. If you've been losing sleep worrying that we might be heading for a fiscal disaster you can relax now, because it's here. Social Security is broke. Medicare is broke. The Obamacare freight train hasn't even hit us yet, and it's already broke.

Prediction: we'll raise taxes, inflate the currency, and then default on entitlements. The only question is when.

Speaking of entitlements, and to make matters worse, we've trained a huge percentage of our population to depend on social welfare programs and to think of work as an undesirable lifestyle choice. When the Mailbox Money stops arriving the inner-city people whom the politically-correct media refers to as "youths" will riot like they've done in Watts, Detroit, Washington D.C., Miami and New Orleans.

As politically-incorrect journalist Fred Reed puts it, "Imagine a black kid of seventeen in Detroit... He has never read a book, and never will. He doesn't know where England is, or Africa, or the United States. His mental world is small beyond the imagining of the literate. He has no grasp of government, and has never heard of any author. He cannot do simple arithmetic. He has perhaps never seen a checkbook, and will never have one. He doesn't watch the news. If he did, would not understand what he was seeing...

Of history, the kid knows only that blacks were enslaved by whites. He cannot approximate the dates of the Civil War... and cannot name a single country in Africa, but he knows that blacks were stolen from their homes and very badly treated.

He has in all likelihood never been out of Detroit, or perhaps his neighborhood. He has no contact with the larger society except through the police and television, where he sees whites leading glamorous lives in a wide world beyond his grasp...

He doesn't have a job or, if he does, it will be of a very low level with no future that he can see. There is a reason why cash-register keys in fast-food chutes have pictures of hamburgers and milk shakes instead of words, why the registers make change automatically. The kid in Detroit can't make change. Little commercial demand exists for the illiterate and innumerate who have very bad attitudes.

Which the kid has. He hates whites, whom he blames for all of his troubles and inadequacies. He hates Asians, who excel in school. It is an ugly hatred on a hair trigger and explodes readily in savage violence. The media play this down, hard, but what you pretend doesn't exist still does."

My daughters tell me I'm a racist for believing the above. In a way I'm glad that they're naive about the ghetto culture. But I saw the riots in Detroit and Miami with my own eyes. And you can turn on the news almost any night and hear about "flash mobs" of "hooded youths" - Madison, Philadelphia and Maryland in just the past few days.

I believe that the true cost of our government is going to be most of our savings, most of what we've been forced to invest in the Ponzi schemes of Social Security, Medicare and Obamacare, and large portions of many of our major cities.
Posted by Oblio13 at 6:14 PM 1 comment:

The Way Things are in Venezuela 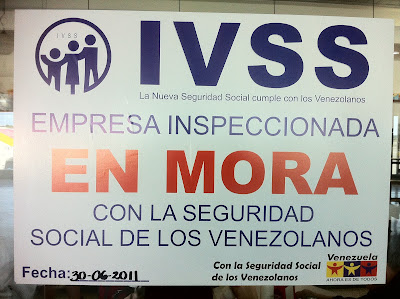 These signs are in most of the restaurant and shop windows in the Caracas airport. A Columbian fellow translated for me and said that the Chavez government allowed the businesses to remodel and stock inventory, then imposed an onerous new social security tax. Those that can't pay are being nationalized. He thinks that was the plan all along. He also told me not to ask Venezuelans about it because they're very afraid of informers, who are rewarded with cash.

Amazing how fast a beautiful country can go down the drain. I've seen it firsthand both here and in Zimbabwe.

There was a Cuban flag flying at the airport.

There were Chinese petroleum engineers staying at the hotel.