Where derailers go to die 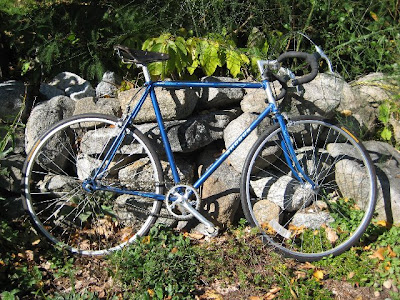 Here's my latest "dump-cycle". I found a decent quality '80's vintage Japanese road bike in the scrap metal pile at our local dump. I converted it to a single-speed by taking off the derailers, shifters and cables, one front chainwheel, and all the rear sprockets but one. The chain was shortened, handlebars re-wrapped, and brake cables and tires replaced. Bearings were cleaned and repacked. The leather seat came from the bike I bought myself as a college graduation present - thirty years old now. I dabbed some rust converter where appropriate. Rides nice, looks too ugly to steal. Weighs 23 pounds.
Posted by Oblio13 at 5:35 PM No comments: 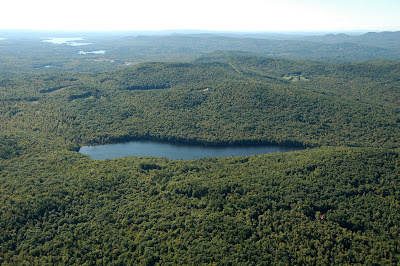 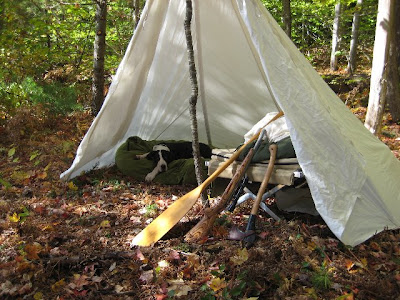 Up through college, I thought I was reasonably tough. Then I joined the Marines and discovered that I'm actually a Little Fluffy Kitty. I no longer have any illusions about what I'm made of. Now I just try to keep other people from finding out.
So I like my camps to be comfortable. Dry and warm. No bugs. Private. Sheltered from the wind. No frightening overhanging tree limbs. An open fire for atmosphere. Clothesline. Hot water so I can start the day with tea and end it all pink and clean. Southern exposure. Views of both the sunrise and the sunset. Big dog in case it gets cold or lonely or scary. An accurate .22 for plinking - suppressed so it doesn't disturb the woods, annoy the neighbors or hurt my ears. A crystal-clear spring bubbling up out of the ground a few yards away. Close to the shore, so I don't have to portage anything too far from the canoe. This place has it all. I think I'll make some sort of more permanent shelter here, dug into the slope.
Posted by Oblio13 at 4:59 PM 1 comment:

Why I love freighter canoes: 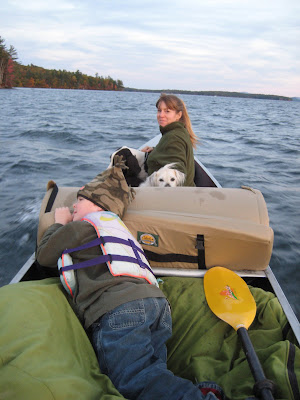 Two kids. Two dogs. Two tents. One wife. Cots - with mattresses. Tent stove. Even a dog bed. Not that I suddenly enjoy traveling heavy, but if mom's not happy, nobody's happy. This is a 19' Grumman square-stern with a 2 h.p. Honda outboard.
Posted by Oblio13 at 4:41 PM 1 comment:

As an airline crewmember, I lay over in the land of Hugo Chavez frequently. Today we parked our plane between Cubana and Iran Air, with Aeroflot further down the line. The hostility towards Americans is increasingly palpable. Not from the "regular folks", although they do tend to be demanding and melodramatic. But the attitude of the Guardia Nacional and airport officials is sometimes deliberately antagonistic. As if the attitude is trickling down from, oh, I don't know, maybe a national leader who is crazier than Charles Manson eating Cocoa Puffs. I've told my daughters to watch the international news so I can wave to them during the mock trial before my execution.
Speaking of airlines, ours is trying to save fuel by paring unnecessary weight. They're stocking flights with less water, for example. The beancounters should roll in some livestock scales and check out the flight attendants. Some of them would cork up the overwing emergency exits. It's not like they make up for it with outstanding social skills, either. The Asian, Latin and European airlines hire pleasant 98-pound hotties. We hire surliness-on-the-hoof.
While I'm on a roll about quivering masses of gelatinous protoplasm, ever sit between two passengers who overlap the armrests and squish up against you? It's kind of like returning to the womb, so warm and moist.
Posted by Oblio13 at 5:25 AM 2 comments:

The single most useful tool you can take to the woods 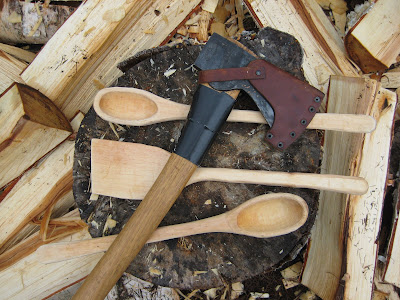 An ax will do anything a knife will, and a lot more besides. Build a shelter. Butcher a moose. Cut vegetables for dinner.
It simply isn't possible to find a good ax in the local hardware store. You'll have to sniff around for a quality antique, or spend some serious money and order from the likes of Granfors Bruks in Sweden. Once you've finally acquired an ax worth owning, it takes a long time and a lot of practice to become competent and safe with it. If you're serious about the outdoors, though, both quests are worthwhile and satisfying.
Pictured above is my Granfors Bruks "Small Forest Ax", the one I use for everything but serious splitting. It seems to have become the standard for bushcrafters. Deservedly so. Despite being small and light it's remarkably powerful, mostly due to the quality of the steel. It will take as sharp an edge as any of my knives.
I use a few layers of duct tape to protect handles from overstrikes. I've developed enough control that I haven't damaged a handle in a long time. But no matter how zealously I guard my ax, on almost every group campout I attend some kid (or worse, a well-meaning friend) will get his hands on it and take a few whacks.
On the day this photo was taken, I used it to cut and limb a spruce tent pole, then to cut, carve and hammer in some tent pegs. I split more than enough birch firewood for our stay, then further split some of that into kindling. That was the work of minutes, so I selected some nicely-grained billets and carved a couple spoons and a spatula. The bowls of the spoons were dished out with an Indian-style crooked knife, but the rest of them (and the spatula in it's entirety) were carved with the ax.
For carving, you can choke up on the handle, or even grip the poll and use it like an Eskimo ulu. With a little practice, you'll be surprised at how precise you can be, and how much faster it is than carving with a knife.
By the way, have at least a rudimentary first aid kit along whenever you're going to do ax work. It would only take an instant to either lengthen or shorten your toes. And stay aware of the "rule of follow-through" - mind the arc that blade will take if it glances off a knot. The shorter an ax, the more dangerous it is.
Posted by Oblio13 at 12:29 PM 3 comments: