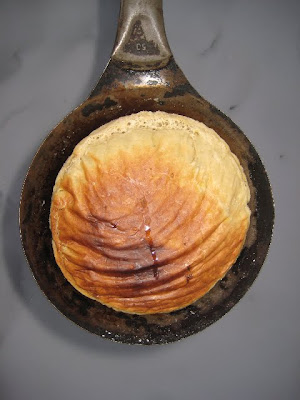 My beautiful blond bride, my petite pretty petunia, my cute cuddly cucaracha, is stranded by the latest snowstorm. So it's me and the dog for New Year's Eve. What do you do when your New Year's date has a hairy face and farts all the time? Well, you don't go public. So we headed for the woods, started a fire, and made sourdough bannocks.

Whisk these dry ingredients together and put them in a plastic bag:


When you've got a nice fire going, melt ghee in a pan. (Butter or oil will do if you haven't made ghee, but they aren't as tasty and they burn much more easily.)

Swirl it around to grease the whole bottom and sides of the pan.

Pour the excess melted ghee into the plastic bag.

Add an egg if you have it.

Add some honey if you have it.

Squish everything around in the plastic bag until it's mixed.

Pour it back in the now-greased pan.

When it's almost done, prop it up in front of the fire and brown the top.

If you try to tip it up too soon, it may droop a bit, as this one has done, or worse.

Hot home-made bread for dinner, and you didn't even get flour on your hands.
Happy New Year everyone. My resolution is to seek out the dark forces and join their hellish crusade. Also to get outside more often instead of just reading about it.
Posted by Oblio13 at 1:07 PM 1 comment:

How's this for a heavy-duty wanigan? 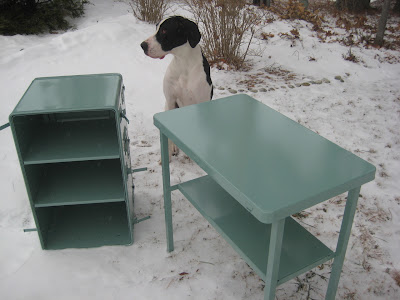 Always on the lookout for anything that will make car and boat camping comfortable for my wife and convenient for me, I bought this at an online surplus store for $80 (but then had to pay $50 shipping). According to the UPS document, it weighs 65 pounds. Hate to think what the government originally paid for it. And then they never used it, it was brand-spanking-new-still-in-the-box.
I'm always haunting surplus stores. Buying cheap surplus is like getting a tax refund. It's like making lemonade when life gives you lemons. Our governing elite steals our money with the threat of violence, pays exorbitant prices for stuff they'll never use to the contractors who make the most campaign contributions, then allows us to buy it for pennies on the dollar.
This is supposedly a "medical storage container". Very heavy-duty double-walled aluminum with three dividers/shelves welded inside. Two of the sides come off and unfold into tables. Rubber gaskets make it airtight. It'd float if it wasn't overloaded. Even has a pressure-relief valve in case I set up a base camp on Annapurna.
These would have been perfect furniture when I was a starving college student and a single military guy, moving every few months and putting my stuff into storage for deployments. The M.A.S.H. motif suits my taste in home decor. Anything that helps organize and store all my crap suits my taste in home decor. Might have to do something about the sickly pale green color, though.
I'll keep this packed with non-perishables and utensils, ready to put in the back of the pick-up truck and go. A tent with a woodstove, cot, and one of these will be more comfortable than my college dorm ever was.
I had plans to build a wood wannigan, but I suspect that the materials would have cost about what this did. Not to mention construction time, slopping paint everywhere and hitting my thumb with a hammer. Wood is warm and traditional, but you gotta like storage containers that are proof against everything from ants to floods to fire to Cub Scouts. Besides, mice would chew through wood the first night at deer camp. They even eat our soap if it's not in a metal container. I might start sleeping in a metal container if another one runs across my face at night.
Posted by Oblio13 at 9:41 AM 2 comments:

First snow-camp of the season 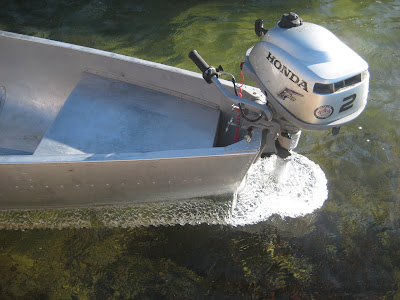 The large lake we live on freezes very late, so I thought I'd get one more night of canoe camping on an island. To make the most of the short days, I launched and loaded the freighter canoe the night before. Next morning, there was a ring of ice around it. Got that chipped off without damaging anything, but then the outboard wouldn't start.
I can take a hint. On to Plan B. Loaded the car and drove towards another favorite place. By now it was snowing hard, and the roads were slicker than snot on ice. Came to a hill the car just wouldn't climb, even with brand-new snow tires. Tried to go back, but couldn't climb the hill I'd just come down, either. Stuck in a little valley on an infrequently-traveled dirt road until a snow plow came along. One of those times when Mother Nature chooses the campsite. Dug out a parking spot off the road, and Ajax and I were on our way. 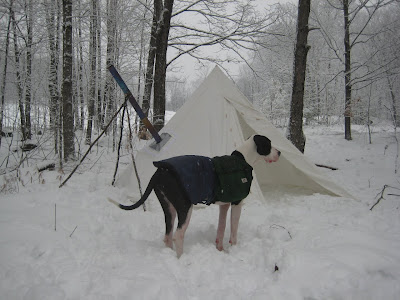 He carries the heavy stuff in his pack, I pull the bulky stuff on a sled. Found a decent spot, cut a pole for the tent and three smaller ones for a tripod to support the stove pipe. Pitched the tent. By then, snow had buried everything. Lost the little tarp I put over firewood, and never did find it. Note to self: Be more organized, and paint little things orange. 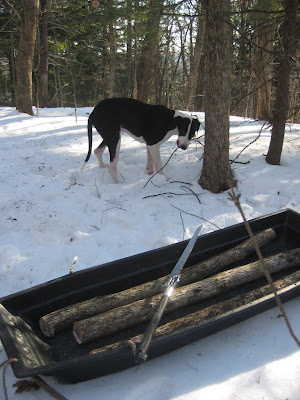 Went off with the sled and saw for firewood. Lucked into a couple dead standing Hop-Hornbeam trees, the King Kong of firewood.
Had hoped to pop a squirrel for dinner, but saw only one and didn't get a shot. 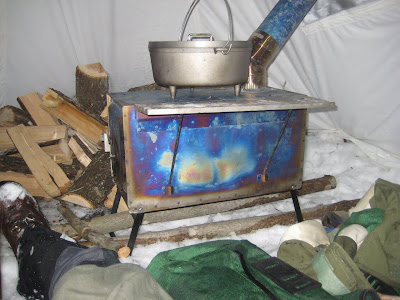 Fortunately, being a pessimist, I had pre-loaded the aluminum Dutch oven with left-over pork roast, ghee and garlic. Warmed it up on the stove and it was delicious. Ajax drooled all over my sleeping bag waiting to lick the pot.
A front passed during the night, dropping the temp to 8*F. The tent stayed so warm that I spent most of the night stretched out on top of the sleeping bag, but a strong wind (30 mph, I learned later) developed and kept the tent flapping. Didn't get much sleep, although that's normal for me the first night of a camping trip. Sleep comes much easier on subsequent days. The stove pipe came apart once and filled the tent with smoke, but I was able to reconnect it fairly quickly.
Next morning went hunting again, but saw nothing. Not even tracks. Nothing was moving in the wind and cold. The temp had been just below freezing when we left, so I'd dressed for cold/wet conditions instead of cold/dry, and was wishing I'd worn mukluks and snowshoes. Another note to self: Don't trust Mother Nature. What a bitch.
Tree limbs were coming down in the wind, so we decided to skedaddle. Chipping out the frozen tent and slogging to the car was a bit of an ordeal. Then to top it off, the car door locks were frozen.
It was a good early-season shake-down.
Posted by Oblio13 at 11:55 AM 5 comments:

I'm in the Dominican Republic tonight. A fellow running for office has a billboard by the hotel. His name is "JESUS MERCEDES". Conjures up images of a messiah in an SL350 convertible. It's going to be my rock-star name if I ever learn to sing or play an instrument. Maybe I'll kill him and assume his identity. Maybe I'll just sign I.O.U.'s with it.
Posted by Oblio13 at 3:45 PM 1 comment: 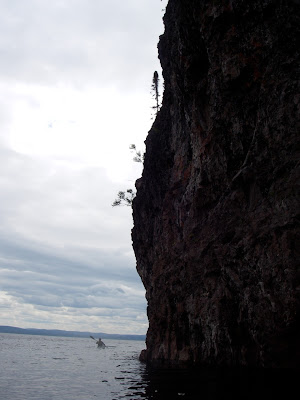 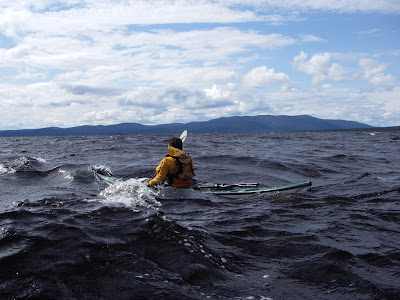 If you're going to be hopping in-and-out, or transporting cargo, or fishing, or jump-shooting ducks, a canoe is the utilitarian pick-up truck of human-powered watercraft.
For seaworthiness and covering miles in big water, go with a kayak.
In a canoe, you feel like you're on the water. In a kayak, you feel like you're in the water.
Posted by Oblio13 at 12:45 PM No comments: