Cowbird Egg in a Phoebe Nest 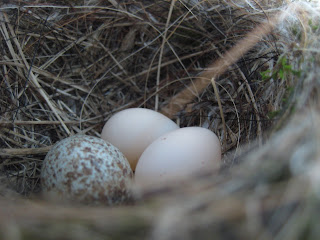 Cowbirds are parasitic. They lay their eggs in the nests of other birds and let someone else do the parenting, at least until after college.
I held my camera over my head to snap this pic, and didn't realize until I reviewed it later that there was a cowbird egg in there.
Posted by Oblio13 at 11:11 AM 1 comment:

Pack ice and 'bergs off Greenland 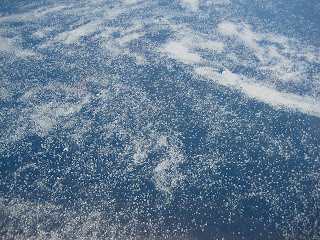 Flew a great-circle route from London to Boston today. South of Greenland, there was pack ice and icebergs to the horizon in every direction. Incredible blues and whites, the pic doesn't even give a hint of it. The water was clear enough to see even the underwater parts of some of the 'bergs. Global warming in action, but at least it looks nice.
Posted by Oblio13 at 7:27 PM No comments:

There really is such a thing. They had a kiosk set up in Central Park.
What do they do, feed the pigeons?
I wanted to ask the vegetarian hippy-chicks handing out leaflets if they'd ever actually seen a wild animal.
Posted by Oblio13 at 2:53 PM No comments:

No one would buy their shitty cars, but now we're paying for them anyway. Not only are taxpayers 17 billion dollars in the hole with no end in sight, but a very dangerous precedent has been set with president Obama firing GM's CEO.
GM will eventually go bankrupt, which is what should have happened in the first place. But not before this latest excuse for our leaders to grab more power and money has run it's course.
If you think bailing out big businesses, banks and mortgage companies is expensive, unfair and inefficient, wait until you get a load of government healthcare.
"The land of the free and the home of the brave" isn't headed towards socialism, we're there. And we went like sheep. Now the flock is being driven at a downhill run towards totalitarianism.
Posted by Oblio13 at 2:42 PM 1 comment:

The Mexican hotel I'm writing this from has a brunch buffet you have to see to believe. All sorts of exotic ethnic foods, not just latin, and a fruit bar with varieties I've never seen or heard of before. I gorged myself into a paralytic torpor. Right now I'm laying on the bed in my room like an anaconda that swallowed a pig, with my computer balanced on top of my distended belly.
I couldn't help but notice during my orgy of gluttony that I was the only one trying anything unusual. Most looked at the strange foods, said "Ew", and moved on to the sorts of things available at McDonald's.
I also notice that the hotel's pools are crowded, but almost no one swims in the ocean.
Why do people bother leaving home if they're determined not to experience anything unfamiliar?
Posted by Oblio13 at 2:16 PM 1 comment:

How bold can black bears be? 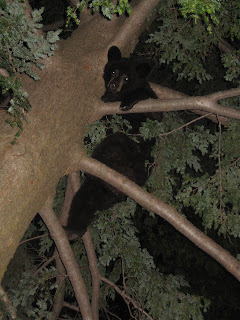 There's been so much wildlife around lately that I feel like I'm living on the Serengeti. Yesterday a moose wandered through the yard, and last night my wife woke me up because she heard the chickens squawking. I went outside with the dog, a flashlight and a shotgun. There was an upholstered easy-chair in the yard. I was puzzling over how that could be when the chair started walking. Then some walking ottomans appeared. A large blackbear sow and three cubs were sniffing around the coop. They weren't alarmed at all by either me yelling or the dog barking. They even grunted some warnings, but finally they wandered off.
About an hour later, they came back. I had some 7 1/2 birdshot shells with me this time, figuring I'd pepper the sow and teach her to be afraid of people. She just stood and watched me as I unloaded the first round of buckshot and reloaded with birdshot, with the dog barking like crazy behind me. I didn't want to hurt her eyes, so I walked around her in a semi-circle to get a better angle, and shot her in the ass from about 25 yards.
There was surprisingly little reaction. Their fur is very thick, and maybe they haven't even shed out completely yet, but I'd have thought that even just the noise and blast would make her skedaddle. Instead she just lumbered off slowly. I suppose I shouldn't have been surprised - we're talking about an animal that thinks eating bees is fun.
The cubs went up a tree, where they stayed for about three hours. I took the pic from the front deck of our house.
I've ordered some rubber buckshot in case they come back. I'll be doing them, me and the chickens all a favor if I can convince them that people should be avoided.
Posted by Oblio13 at 3:22 PM No comments:

Choosing where to live before choosing what to do. 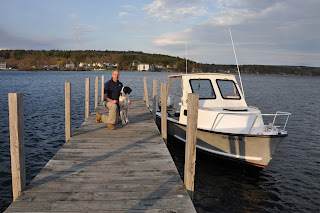 One of the few things I've done right is choosing where to live before choosing what to do for a living. Most of the big money's in the big cities, and most of the people making it wear neckties and spend their waking hours in offices. They're wage-slaves who are miserable fifty weeks a year so that they can spend two weeks a year where I live. I'd love to trade paychecks with them, but I sure wouldn't trade lifestyles.
Posted by Oblio13 at 5:36 AM 1 comment:

Dawn in a swamp 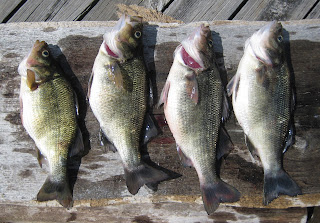 Canoed to a swampy cove this morning with the dog for company. Redwing Blackbirds everywhere. Watched two pairs of geese dispute nesting territory. Had a beaver persistently circling us and slapping it's tail. Heard a turkey gobbling in the distance.  A pair of Mallards flew past close aboard with their wingtips touching the water. Caught four nice White Perch for dinner and a few small sunfish destined to become crawfish bait. The dog fell out of the canoe and then climbed back in without getting me wet.
Posted by Oblio13 at 4:58 AM No comments: