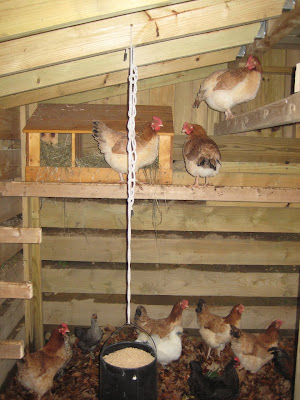 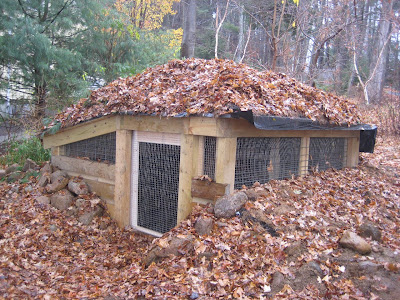 Built a sod-roofed, earth-sheltered chicken coop in the hope that it will be visually unobtrusive, warm in winter and cool in summer.
Posted by Oblio13 at 5:23 AM 9 comments:

"Foods that will Win the War"

During WWI, America and Canada were exporting as much wheat as possible to our starving European allies. The U.S. Food Administration campaigned to reduce domestic waste and consumption. "Waste in your kitchen means starvation in some other kitchen across the sea". In 1918 it published a book called "Foods that will Win the War". I adjusted some of its figures for today's population:
"A slice of bread contains a bit less than three-fourths of an ounce of flour.
If each of America's 20,000,000 homes (112,000,000 homes today) wastes one slice per day, the country is throwing away daily over
14,000,000 ounces of flour (78,000,000 ounces now) —over 875,000 pounds (4,900,000 pounds), or enough flour for over a
million one-pound loaves a day (5.6 million loaves now). For a full year at this rate there would be a
waste of over 319,000,000 pounds of flour (1,786,400,000 pounds) —1,500,000 barrels (8,400,000 barrels)—enough flour
to make 365,000,000 loaves (2,044,000,000).
As it takes four and one-half bushels of wheat to make a barrel of ordinary
flour, this waste would represent the flour from over 7,000,000 bushels (39,200,000 bushels) of
wheat. Fourteen and nine-tenths bushels of wheat on the average are raised per
acre. It would take the product of some 470,000 acres (2,632,000 acres) just to provide a single
slice of bread to be wasted daily in every home."
Average yield-per-acre has increased to about 50 bushels today, largely due to agricultural methods that are unsustainable in the long run. Nevertheless, it would still "take the product" of some 784,000 acres "just to provide a single slice of bread to be wasted daily" in every American home.
When something as unimportant as a slice of bread is multiplied by our enormous population, it staggers the imagination.
Posted by Oblio13 at 5:16 AM 4 comments:

Opening morning of deer season at a buddy's farm in Missouri, I saw a small buck and a doe. Strangely, the latter was following the former. (It's almost always the other way around, especially this time of year.) The bag limit is one buck with at least four points on a side, and unlimited does. Watched them for a while hoping something better would show up, then picked off the doe when they started leaving. The next morning I hunted in the same spot, and was entertained by a red fox feeding on the gut pile. Left for lunch, and when I came back the gut pile was entirely gone. A pack of coyotes must have discovered it in the couple hours I was away. They didn't even leave a scrap of stomach contents. That night I passed on a small doe. After that, days of unending rain, and not another deer sighting. Glad I put meat on the ground opening day.
Posted by Oblio13 at 10:35 AM No comments:

The House of Representatives passed it's healthcare reform bill last night. According to the CBO (Congressional Budget Office), it will cost between 17% and 20% of your pre-tax income. Even assuming that their estimate is accurate - the cost estimates for every other entitlement program have been wildly optimistic - that's not a bargain I'd leap on with the fury of a thousand jungle beasts. But it will be mandatory. You buy the insurance or you pay a fine, citizen.
What's driving health care costs can be divided into four behavioral categories:
1. Patient behavior: We're our own worst enemy. Most medical problems are self-induced. If America put down the cigarettes and Twinkies, there wouldn't be a healthcare crisis. The House's bill does not address personal responsibility at all. On the contrary, it will force those who choose healthy lifestyles to subsidize the chainsmoking hogbodies who don't.
2. Healthcare provider behavior: Doctors and hospitals want to make as much money as they can, plus they're forced by the threat of lawsuits to practice "defensive medicine". They order high-cost, low-value tests and procedures because there's no incentive to economize, they'll be sued into the stone age if they miss something, and, well, they're greedy. There is nothing in the bill whatsoever to encourage healthcare providers to use economic common sense.
3. Lawyer behavior: Lawyers make their parasitic livings by finding mistakes and assigning blame. See above. The House bill completely ignores the issue. Why is the subject of tort reform ignored? Just a wild guess, but maybe because our president is a lawyer married to a lawyer and our vice president is a lawyer married to a lawyer? And somehow the Trial Lawyers Association has become the nation's second largest "campaign contributor"?
4. Insurance company behavior: Greed yet again. They're in business to make money, not because they're humanitarians. And they do so by charging as much as possible, and paying out as little as possible. Why aren't we going to a single-payer system that simply eliminates insurance companies? Could it be because the largest "campaign contributor" - I know you were wondering who was in first place - is the F.I.R.E. (Financial/Insurance/Real Estate) industry?
Congress is a legislation vending-machine. If lawyers and insurance companies put enough money in at the top, the legislation they want comes out at the bottom. To add insult to injury, congress has already exempted themselves from this "reform". It's for us serfs, not our masters. You know those guys who keep getting busted with sacks of money in their freezers and such? Yeah, them.
Posted by Oblio13 at 9:22 PM No comments:

Replaced the beat-up plastic skidplate under the engine of my VW Jetta with a heavy-duty aluminum aftermarket model called a "Panzer Plate". It looks as ruggedly cool as it sounds. Wish I had a whole car made like it. I'm all atwitter in anticipation of bashing ice chunks at 70 miles per hour on I-93 this winter.
Posted by Oblio13 at 9:12 PM No comments:

A large, fancy car in a public parking garage was taking up two spaces. There were no other spots reasonably available, so I shoehorned my little commuting car in next to it. When I returned, the fancy car's space was empty, but the driver had apparently expressed his displeasure by folding in my side-view mirror and keying the side of my car.
Two days later, I noticed the same car, parked the same way near the same spot in the same garage. I recognized things in the backseat as well as the make, model and color.
It took me several long moments to decide whether I was a turn-the-other-cheek kind of guy, or a payback-is-a-bitch kind of guy. What would you have done?
I went with payback. It was sweet. I hope it wasn't bad karma.
Posted by Oblio13 at 9:08 PM 5 comments:

Hiked into the Havasupai reservation. It's a fantastically beautiful oasis at the bottom of the Grand Canyon.

Now they're obese diabetics addicted to meth and alcohol. They live in government housing, with what amounts to a giant extension cord draped into the canyon for electricity. They milk tourists and look for things to be offended by.
Posted by Oblio13 at 7:50 AM 3 comments: