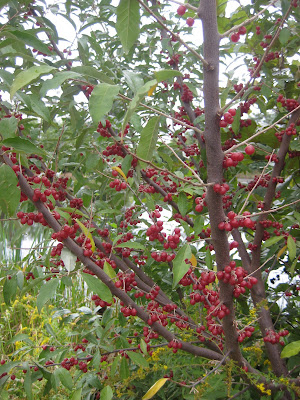 Autumn Olive (Elaeagnus umbellata) is an ornamental introduced from China and Japan that's escaped cultivation and become invasive. The berries are good fresh and as jam, juice and fruit leather. Once you learn to recognize it, you'll see it everywhere this time of year. 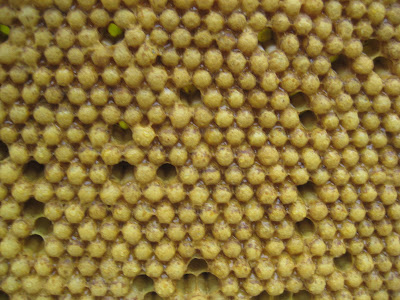 Bee larvae might be a little more difficult to come by. Having read that bears prefer larvae to even honey, and that they're considered a delicacy in Thailand, we decided to try some from our hive. Picked them out of the comb with a toothpick and ate them raw. Can't describe the taste because there really wasn't any. Might try stir-frying some next time.
Posted by Oblio13 at 1:43 PM 2 comments:

Another dissertation on shaving:

I have failed to make the leap of manliness required of shaving with a straight razor. I do alright on my cheeks, but if I use it under my nose or on my chin, I end up going to work with more cuts than an emo whose puppy just died.
My wife bought me one a few years ago, along with the basic accoutrements. I've made a sincere effort to master the art. I like the way it focuses my mind first thing in the morning - handling a straight razor near your eyes and throat will do that. I'm just not good with it.
But I have learned two things that have served me well since: How to sharpen stuff. Really sharpen stuff. And that an old fashioned brush and soap make a remarkable difference even with modern disposable cartridge razors. Now I actually enjoy scraping my face. It's still not something I'd do for fun in my spare time instead of canoeing or riding, but it's become a pleasant ritual rather than drudgery. It's taken me three-quarters of the average American male lifespan to break the code on shaving. Benefit from my experience:
Boys, you need - I don't use that word lightly - a good quality badger hair shaving brush. Not synthetic. Not the cheapest thing you can find on Ebay. You can pay a shocking amount for such a brush. Apparently badgers do not willingly part with their hair. But keep things in perspective, an eight-pack of disposable razor cartridges costs $20 these days. Buy quality and only cry once. You're going to use it every day, and it'll last for for a couple decades.
You also need a tub or puck of good quality shaving cream or soap. Again, not cheap, but they last a long time. Like approximately forever. Marketers couldn't have that, of course, which is why they convinced us we need aerosol cans of goo instead. Give traditional soaps a fair try, and you probably won't ever be happy again with canned gel.
Up until bottled water, multi-bladed disposable razors and canned gels were perhaps history's greatest marketing scam. King Gillette, the founder of the company that bears his name, didn't invent a razor, he invented a marketing philosophy: Make people think they need something, and make it disposable. Schick tried to beat Gillette at their own game, and the arms race was on. Now we have disposable cartridge razors with five blades and lubricating strips and vibrating handles with batteries, made of Krpytonite and blessed by the pope. I don't know how anyone can maneuver them, they cover half your face.
Old fashioned safety razors - the kind your grandfather used, with double-edged blades - are making a comeback. They're fun to use, the blades cost a tenth of what disposables cost, and there's no environmentally unfriendly plastic. Shaving with them is a bit of a lost art, but they're easier to master than straight razors. And you don't have to worry about sneezing and losing an ear. The blades are not "springy" and forgiving as are those in modern cartridges, nor do the heads swivel. So, slow down, use short strokes, remember that the angle is critical. And use NO pressure. None. Just think of it as wiping off the shaving cream. Don't expect to be baby-butt smooth after one pass. Splash more hot water on your face, lather up again - your brush will still have more than enough lathery goodness - and have a second go, and then a third. Think of each pass as whisker "reduction" rather than whisker "removal". The cumulative effect will be good.
Girls, your husbands/boyfriends/smolderingly sensual European lovers want these things. They just don't know it yet. Maybe let Santa know.
Posted by Oblio13 at 6:54 PM 1 comment:

Daughters on a Rampage

Who should have the authority to tell you what you may and may not look at? The sort of government bureaucrats who brought us the IRS and the DMV? Sanctimonious hypocrites with a religious agenda? Feminists who majored in 'gender studies' and see oppression in every shadow?
Because those are the folks who will concern themselves with the issue while the rest of us are busy earning a living.