It’s fun to forage wild edibles, especially when the catching is even better than the eating. With crayfish even little kids can do the hunter-gatherer thing. They're an under-utilized food source, and they're as delicious as lobster and shrimp. 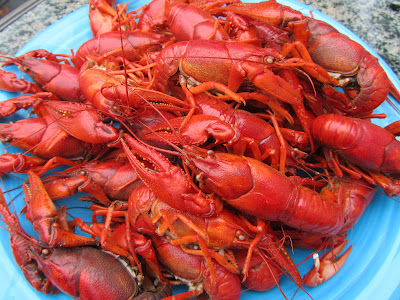 They're eaten all over the world, boiled, fried, smoked, and sun-dried. My favorite recipe is the simplest: get a couple inches of water boiling, and drop them in headfirst to make it quick. Steam for five minutes, then serve with butter and perhaps a squeeze of lemon. The edible part is the tail. The green goo you'll see when you pull it off  is an organ that performs the function of our liver and pancreas. It's edible too. There's a "vein" -actually the intestine - along the tail that you can strip out. Some people don't bother. Sometimes, if they're exceptionally large, the claws are worthwhile.
If you want to save some crayfish for later, pop them - whole or just the tails - into a plastic container, cover them with water, and freeze them. 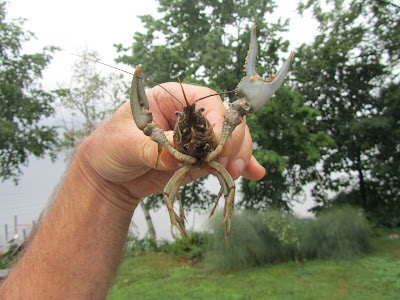 Crayfish have been around for 115 million years or so. They prefer clean, oxygenated, warm water. They're most active at night. They move to deeper water and become torpid in winter. They're like canaries in the a coal mine, in that they don't tolerate pollution or low oxygen levels. You can judge the quality of water by the crayfish in it, like you can judge the health of a garden's soil by its worms.

There are at least four species here in New Hampshire: Orconectes limosus, Orconectes rustics, Orconectes immunis and Orconectes virilis. They're all common, and some of them are invasive. Eating them is the ultimate biological control, with us as the predators.  The lake we live on, Winnipesaukee, has O. virilis. 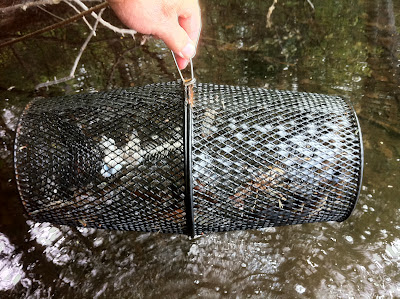 This is a run-of-the-mill minnow trap, available in almost any hardware store. They work well for crayfish, too. They'll catch all sizes, so if you want small ones for bait in addition to large ones for eating, this might be your best option. 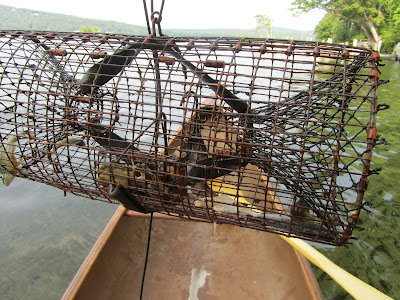 This is a very expensive welded-trap that gets a lot of hype on the internet. They do catch very well, probably better than any others I've tried, but unfortunately they rust away quickly. Maybe there's something corrosive about our New Hampshire water. 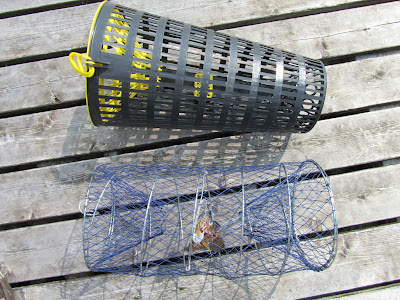 These traps are from Sweden. Because of the size of the holes in them, they only catch large crayfish. The plastic one on top works very well and has been durable. If I could only have one type of trap, this would be it.

The lower trap is collapsible, so it's nice if you're going to hike into a pond. It catches okay IF you pull it up every two or three hours. Crayfish can get out of it relatively easily, so once they've eaten their fill, or if the sun is coming up, they simply leave. 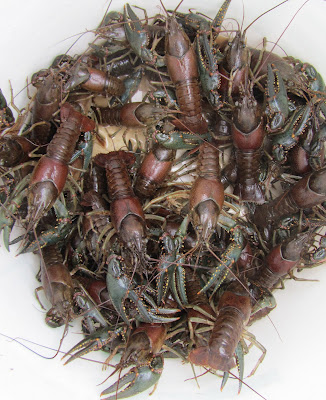 Don't try to keep the crayfish you've caught in a bucket full of water unless it's aerated - more than a couple will run out of oxygen quickly. Just keep them cool and moist in your refrigerator or a cooler and they'll last for a day or two.


For bait I use fish heads and offal, or fish-based cat food. The oilier the better, like salmon. Bait should be fresh. Contrary to popular belief, crayfish are picky eaters.
When I clean fish, I put the heads, skins and etc. in plastic or wire bait boxes, which are in turn put into plastic bags and frozen. Then I just pop a box into each trap when I set them out. Bait boxes aren't just convenient, they're important because they keep the crayfish from eating the bait from the outside of the trap. If they can access it without going in, they will.
Some waters have amazingly large populations of crayfish while seemingly similar ones a short distance away have almost none. If there are a lot of crayfish in a pond or stream, you should be able to see some by overturning a few rocks.
In order to learn more, I sometimes place traps very precisely, using a mask and snorkel, and observe them several times a day. I find that traps need to have good contact with the bottom. If they hang up on rocks or sticks, crayfish will have to climb up to enter them, and they don't like to expose themselves to predators. They should also be in water deep enough so that waves won't rock them. I tend to catch only small crays near shore even when the water is still. The larger ones seem to prefer ten or fifteen feet of water. They also like the cover of plants and rocks. If you can find a shoreline that's been protected from erosion with large rocks, try there.
If I feel a need to protect my traps from theft, I space them along a line, twenty or twenty-five feet apart, and sink them without a float. Make sure to mark a couple landmarks on shore to facilitate finding them the next morning. Grapple them up by hooking the line with a stick. 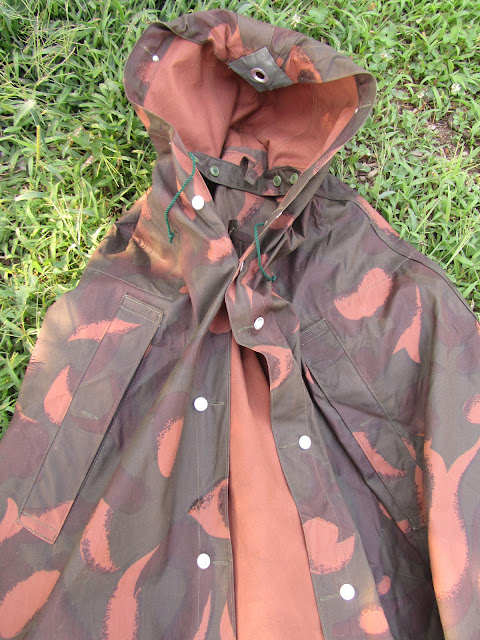 After years of experimenting, rain capes have become my favorite rain gear, and specifically military surplus rain capes, because they're rugged and versatile. They haven't caught on in the Americas, but many European armies use them. This one is Hungarian. They call it a "plasch-palatka", which I am told translates as "cloak-tent".

Like a poncho, it's comfortable to hike in, with good ventilation for warm weather. Even better than a poncho, it provides closer coverage and doesn't flap around so much in the wind. It's easier to put on and take off than separate pants and jackets. It may be worn over a pack or under a belt. It's full enough to cover your legs when sitting on a deer stand or canoeing. And unlike a poncho, you can swim in one if you have to, as long as it's mostly unbuttoned or your arms are out of the holes. You can even relieve yourself while wearing one without making a big production out of it.


There's a button arrangement that takes in some tucks to keep it from falling over your shoulders, and a drawstring to form a hood. The grommeted corner that remains at the peak of the hood is tucked under. Some rain-capes have a "tail" that is buttoned up inside so that it doesn't drag on the ground, but the cut of this one is such that it isn't necessary. There are arm holes, but it's typically worn unbuttoned with arms inside. 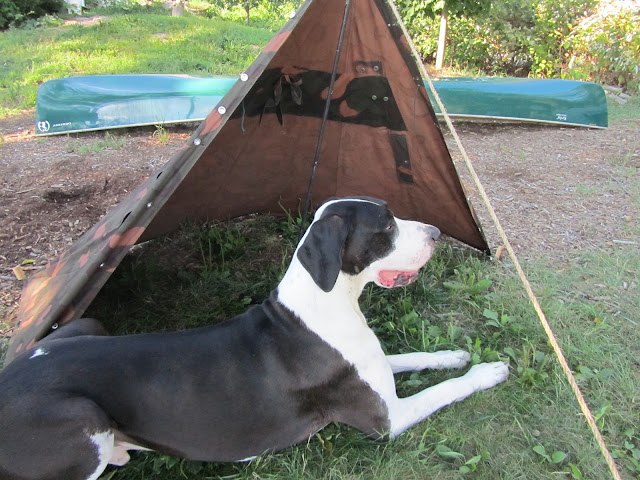 Here it is rigged as a minimal shelter. It would block some wind and provide some shade, but wouldn't do for much more than a gentle rain. Two can be buttoned together to make a small tipi-tent, but wind-driven rain will still come in at the arm holes. They button shut, but unlike some rain-capes, there's no overlapping flap arrangement. The Hungarians designed it to be more of a garment than a shelter. By the way, it's nearly impossible to pitch any sort of tent with the dog helping. He's constantly going in and out, and not necessarily via the open side. 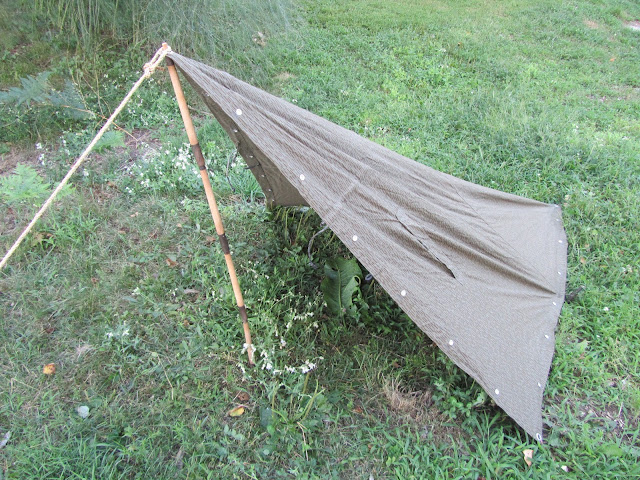