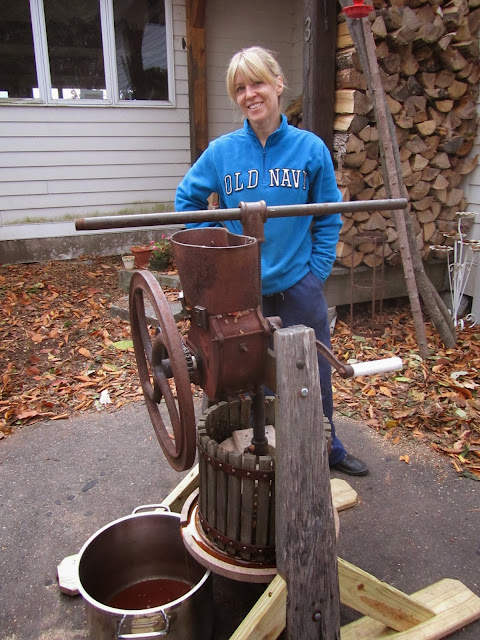 For much of human history, the safest things to drink had alcohol in them. "Hard" cider was very popular in England, and early emigrants from there brought apple seeds to New England.

Grains required for the production of beer don't thrive in the northeast's soil and climate, but apples do. Before long every homestead had a small orchard and a cider "press", or "mill". Cider, both sweet and hard, became the most popular drink in America. Cider houses were ubiquitous. Sometimes cider was also made from pears and peaches. Children drank ciderkin, a weaker version made from soaking apple pomace in water and re-pressing it. Sometimes a little molasses and ginger was added.

By the turn of the eighteenth century, the average New Englander was drinking about 35 gallons of cider a year. John Adams started every morning with a tankard. Wages, taxes and debts were sometimes paid in cider.

In the early 1900s, huge numbers of German immigrants insisted on drinking beer instead. The barley-friendly soil of the Midwest and the advent of mechanical refrigeration made beer production easier than it had been. The popularity of cider waned.

Then the temperance movement and Prohibition almost put an end to it. The Volstead Act limited production of even sweet cider. Prohibitionists burned countless orchards.

By the time Prohibition was repealed, Americans had forgotten their love of cider. Barley could be brought back into production faster than trees, so beer became the predominant alcoholic beverage.

Add yeast, stir, then seal and affix an airlock. Keep in a dark place with a temperature close to 60 degrees.

Within a day or two you'll see carbon dioxide bubbles in the airlock, indicating fermentation. This bubbling should subside within two weeks. Let the cider sit another week to allow the yeast to settle out.

Bottle and let it sit for at least another couple weeks. Your cider will probably be “still” (not fizzy) unless you let it age for several months. Flavor improves with age.