If you get a chance to visit Paris with a personal interpreter, go for it. 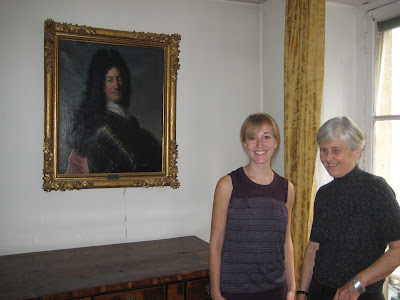 My daughter is spending a semester studying French at the Sorbonne. She's renting a room on the Left Bank, a couple blocks from the Louvre, from "Madame". I went over to visit. We ate snails and duck gizzards at sidewalk cafes. Took in historical sites ranging from the Roman Empire to the Reign of Terror. Watched the Eiffel Tower's new light show. Walked Madame's dog along the Seine, and were then invited in for tea. Madame's house and almost everything in it look to be older than the United States. The dude with the 'do and the armor in the painting was some ancestor of hers. A couple others were on Lafayette's staff and were present at the battle of Yorktown. She was eleven years old when Germany invaded France during WWII. Her parent's house was looted and burned, and she rode out the rest of the war in Morocco. She told us about a friend who is "an old lady" who smuggled downed Allied pilots from Belgium to Spain for the Resistance.
Posted by Oblio13 at 6:34 AM 1 comment:

Ever wonder where all the hippy-chicks went?

They're pretending to be Indians now. Pudgy middle-aged women hanging out at pow-wows, weaving "dream-catchers" with colored yarn and spouting incomprehensible phony spiritualism. They call themselves things like "Earth Mother Bear Spirit".
Posted by Oblio13 at 4:51 PM 6 comments:

How to Store Diesel Fuel 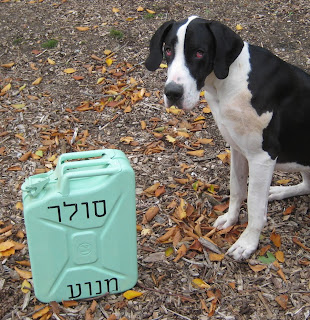 My wife comes from hardy stock. 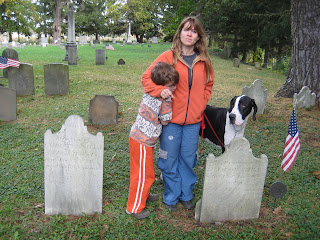 The headstone on the left belongs to Christina Gortner, one of Rudy's great great great great great great (six "greats") grandmothers. On the right is that of John Jacob Hill, her husband. Rudy is sulking because he wanted to play his video game.
This is being written as we're camping and exploring in the Muncy valley of Pennsylvania, looking up some family history. The earliest white settlers here were Gortners (also spelled Gardners, Gertners, and etc.) and Hills, both lineages being ancestors of my lovely bride.
A father and son who shared the same name, John Daniel Hill, were both captured by indians. They were taken to Canada, where the father starved to death and the son was murdered by them. Joseph Hill Sr., their brother and uncle, respectively, was also captured but escaped and later fought in the revolution of 1776.
George Gortner was Rudy's great great great great great great great (seven "greats") grandfather. He fled Germany on account of the calamities of the Thirty Years War and settled here on the north side of Muncy Creek, about a mile and a half from it's outlet into the West Branch of the Susquehanna, in 1773. He spent five years clearing a farm on the good bottom land before being killed by Indians. We have four accounts that vary in details. In what seems the most credible, he and a friend named Christian Merkel were inspecting his corn crop after a Sunday dinner. Several indians laying under the bank of a stream fired on them, killing the former and nicking the latter's ear. The Indians went on to kill another man named Clark about two miles upstream, then departed for parts unknown. Christian Merkel had been a colonial ranger during the French and Indian War, and was then the captain in command of the garrison at Fort Muncy, to which he escaped. He returned with a party of his soldiers and buried the scalped and mutilated body of his friend in an unmarked grave close to where he fell. As near as we can figure, there's a shopping mall on top of him now. The valley was then "abandoned to the savages" in what became known as "The Great Runaway". All the settlers who remained in an attempt to tend their crops were killed "without exception."
Christina Gortner was one of George Gortner's daughters, She was engaged to John Jacob HIll when he enlisted in the Continental Army, and waited almost eight years for him to return. An interesting entry from Christina's diary: "When we moved here in 1773 then and afterwards the Indians were civil and friendly, and on the upper part of the place they had lodges or what was called an Indian town. We used to go to see them often and had no fears. Their diet consisted of almost anything they could get. One day we were there and a squaw with several kits around her seemed to be much interested in something covered up in the hot embers. Soon she removed it. It was a land tortoise with the bottom side up. After removing the flat shells she raised the contents carefully and preserved the broth and drippings in the shell and divided the fleshy parts between her and the children, to the latter sparingly. She then raised the shell and between whiffs and audible sips and ahs, she made the broth all her own; but not without boxing each papoose that came near enough, coaxing for just a little."
John Jacob Hill was one of Liz's great great great great great (five "greats") grandfathers, born May 9th, 1750 in Windsor Castle, Pennsylvania. In the Pennsylvania archives, he is listed as a captain in the Berks County Militia. He was a shoemaker until the revolution broke out, when he enlisted in the Fifth Regiment of the Continental LIne. He endured the winter at Valley Forge, and reenlisted after General Washington's famous speech there. He witnessed the "sort of mutiny" that General "Mad Anthony" Wayne ended by barring the way and saying "You can only proceed by crossing my dead body". In the end, John Jacob served a total of seven years, six months and twenty days, and campaigned in seven states - New York, New Jersey, Pennsylvania, Maryland, Virginia, North Carolina and South Carolina. Among the many battles he participated in was the crossing the icy Delaware to attack the Hessians on Christmas Eve. At the end of the war, he was "permitted to carry home with him his musket with which he never parted." He took up shoemaking again, as well as farming and beekeeping, and settled down with the Christina Gortner mentioned above. Although disabled "from exposure during his protracted army life", he refused to apply for the pension he was due, saying "I have enough, and we now have a free country." (He would undoubtedly be appalled to learn that nowadays he would be considered a dangerous criminal for enjoying the freedoms he fought for.) He died on January 9th, 1824, six days after his wife passed away.
Posted by Oblio13 at 1:18 PM 10 comments:

The Last of the Garden Harvest 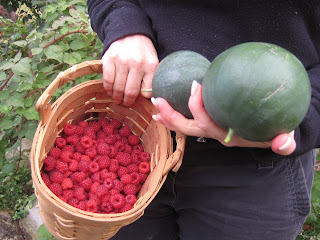 In a year when almost nothing did well, these two standbys are still producing: Heritage raspberries and Blacktail Mountain watermelons.
I planted the former a couple decades ago. We cut them back to the ground every year. They're still going strong.
The latter are an open-pollinated variety, cannonball-sized with orange-red meat, and very sweet. We save the best seeds from the best fruits every year.
Posted by Oblio13 at 11:50 AM No comments:

It's a tired argument, but it keeps popping up.
I used a .45 in the Marines. I am issued a .40 now as a federal officer. I usually carry a 9mm as a personal CCW.

Urban myth says that .45 ACP hits like the Hammer of Thor, 9mm Parabellum is inadequate, and .40 S&W is some sort of compromise.

In reality, with the recent advances in bonded bullet technology, they are statistically identical in terms of real-world performance. All deliver, depending on the load, somewhere between 300 and 500 foot pounds of energy. (Which is about the energy of a thrown baseball, by the way.)

As for diameter, of course bigger is better within reason. But the unexpanded diameter of a .40 S&W is less than 5 hundredths of an inch greater than a 9mm. A .45 ACP is 96 thousandths greater. Do you really think you'll hit many more blood vessels and vital organs with that extra 45 thousandths or 96 thousandths? And remember that you're giving up magazine capacity to get it.

One of my closest friends is an emergency room physician as well as a shooting enthusiast, and we've had conversations about things like this. He says he can't tell a difference in wounding effects. His standard joke when someone really presses him about which is the most lethal is to say "a shotgun".

The military uses full metal jacket (FMJ) bullets because they're limited by the Geneva convention, and concerned with different tactical problems than us civilians. They routinely shoot through helmets, body armor, walls and vehicles at relatively long distances. Civilians, on the other hand, are usually at or near contact range in a defensive encounter, and would have a hard time convincing a jury that a fellow a ways off and on the other side of a wall was a threat.

So: Any of those three calibers with modern, good quality bonded hollow-points will perform about as well as the next, and as well as a .357 Sig or any other reasonable defensive handgun cartridge. Magazine capacity tips the scales for me. I'd rather have a 9mm or a .40 than a .45, because ammunition is like tokens at the arcade: The more you have, the longer you can play. 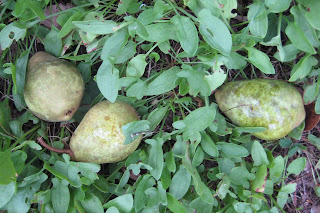 Okay, maybe "feral" is more accurate than "wild". From a neglected tree on an old farmstead. I picked up about 30 pounds of fresh drops, while others fell all around me. I could easily have picked up a couple hundred pounds. They're delicious, with almost no insect damage. They're laying in Sheep Sorrel, by the way, so I ate some of that, too. It was a good combination.
Posted by Oblio13 at 5:44 PM 2 comments: 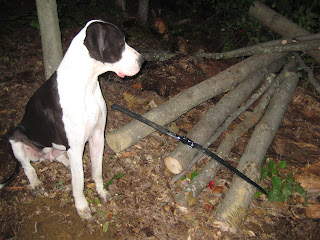 This is a very large folding arborist's saw - the blade is 20" long. I was a little tentative about buying one, as with shipping it came to $140. Fortunately, it was a good investment. It's been pruning our trees, and will be replacing the bow saw for this winter's camping trips. It's a little heavy at two pounds, but cuts significantly faster and more efficiently, has a longer reach, is easier to maneuver into tight spots, and more compact to transport. It's also safer, as there's no temptation to put your hand alongside the blade, even to start it. When folded, the blade is completely covered, with no separate guard to fiddle with or misplace. It sectioned some fair-sized red maple and hop hornbeam logs, both dry and green, with no trouble.
Posted by Oblio13 at 5:39 PM 3 comments: